In a year of national distress, Los Angeles proved to be anything but immune. Between November 2020 and the beginning of February 2021, a wave of new COVID-19 cases crested over The City of Angels, overwhelming the public health system. However, with the vaccination effort now well underway and gaining steam, there is some hope on the horizon. Nevertheless, the pandemic has accelerated regional migration patterns — a development that has worked against the LA metro. Much as high costs of living and higher state income taxes are driving many Northeast residents to the Sun Belt, a similar trend is well underway in Southern California, fueling outmigration to metro areas in neighboring Arizona and Nevada.

California’s reputation as the epicenter for new rent control is not unfounded. However, while the national attention sat elsewhere in November, California voters quietly voted down Proposition 21, an initiative that would have granted counties more autonomy to levy new rent controls. According to NMHC, the Proposition’s rejection is a “victory for hardworking Californians who deserve real housing solutions that increase supply and bring costs down.” While the multifamily sector in LA saw its fair share of softness in 2020, the metro’s fundamentals improved to end the year.

ABOUT THE DATA: All data in this section are provided by Real Capital Analytics (RCA). Data are sourced from RCA’s Hedonic models. The definition of Greater LA is based on author’s calculations and includes RCA’s tracking of the Los Angeles, Orange County and Inland Empire markets. Observations are weighted by quarterly sales volume.

Apartment cap rates across Greater Los Angeles have consistently tracked below the national average. Through fourth-quarter 2020, Greater LA cap rates averaged 4.6%, based on a Chandan Economics analysis of Real Capital Analytics’ hedonic data (Chart 1). These yields were up a marginal 2 basis points (bps) from the previous quarter and down 1 bp from the same time last year. Apartment cap rates did, however, push higher through 2018 and 2019, bucking the national trend. Absorbing the effects of newly introduced regulatory policy and negative population growth for three consecutive years, Greater LA cap rates were up 29 bps from their lows in the second quarter of 2018. Marginally rising cap rates in LA and compressing national cap rates have led to a narrowing spread. In late 2016, the yield spread between the national average for multifamily cap rates and those measured across Greater LA totaled 115 bps (Chart 2). Fast forward to the fourth quarter of 2020, and the spread declined to just 51 bps — the lowest reading on record. 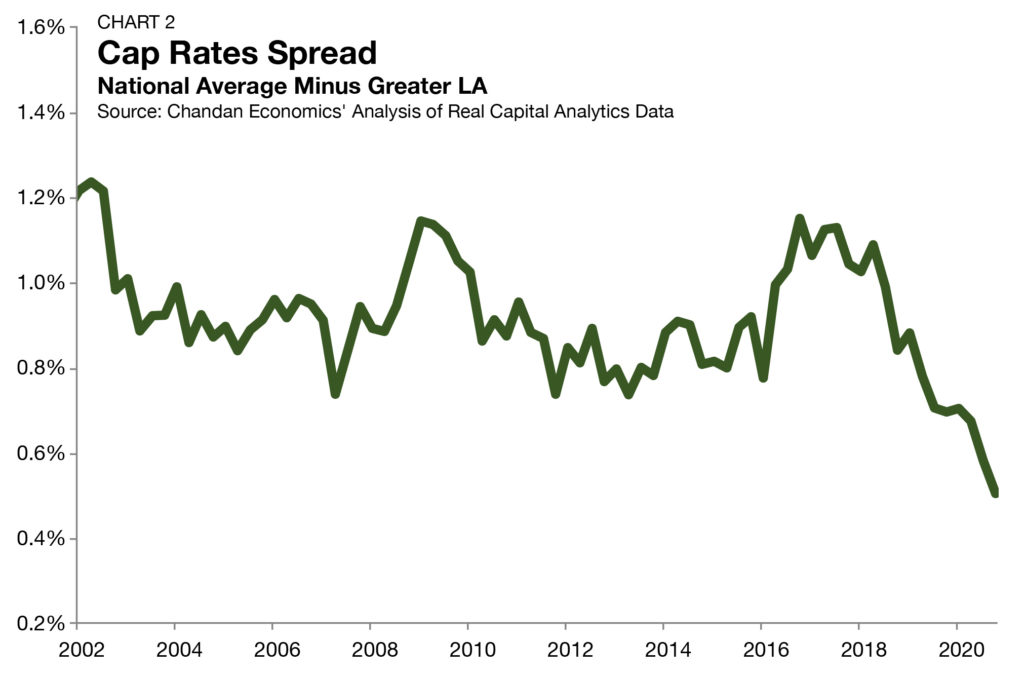 Sales prices for multifamily properties in Greater LA have been impacted amid the ongoing pandemic. After topping out at an average of $277,200/unit in the first quarter of 2020, prices declined for three consecutive quarters, averaging $263,300 through the fourth quarter. Measured year over year, multifamily sales prices were down 4.4%, starkly contrasting with the 8.5% positive gain measured across the national average (Chart 3). Measured quarter over quarter, prices continued to decline in the fourth quarter, but at a slower pace. After falling by 1.4% in the second quarter and 3.2% in the third quarter, prices fell by just 0.6% in the fourth quarter, signaling that the bottom may be near. The drop-off in prices came as buyers and sellers remained far apart on the definition of “fair value” in the age of COVID-19. An abundance of refinancing capital has also allowed existing owners to weather the storm during a turbulent year. Together, these factors led to a dramatic reduction in investment activity in the second quarter, when the shutdown’s effects were their most severe.

Sales volume declined 70% quarter over quarter and 82% year over year (Chart 4). Multifamily sales recovered considerably in the second half of the year, jumping on a quarter-over-quarter basis by 178% in the third quarter and 46% in the fourth quarter. Year over year, however, quarterly volumes closed out the year down by 23% compared to fourth-quarter 2019 levels. Lacking both the geographic constraints and the zoning allowances of a city like New York or even Chicago, Los Angeles is not a city best known for its skyline. Instead, Los Angeles is a metropolis of low-rise development as far as the eye can see. It should therefore come as no surprise that small multifamily and single-family rentals (SFRs) make up the lion’s share of rentals across the Los Angeles metro. SFRs, the single-largest rental property type in the LA market, accounted for 39% of all renter households (Chart 6). Small multifamily properties, or those with 5 to 49 units, made up 33% of renter households, while two- to four-family homes accounted for 15%. Lastly, large multifamily properties, defined as buildings with 50 or more units, comprised just 11% of renter households in LA. 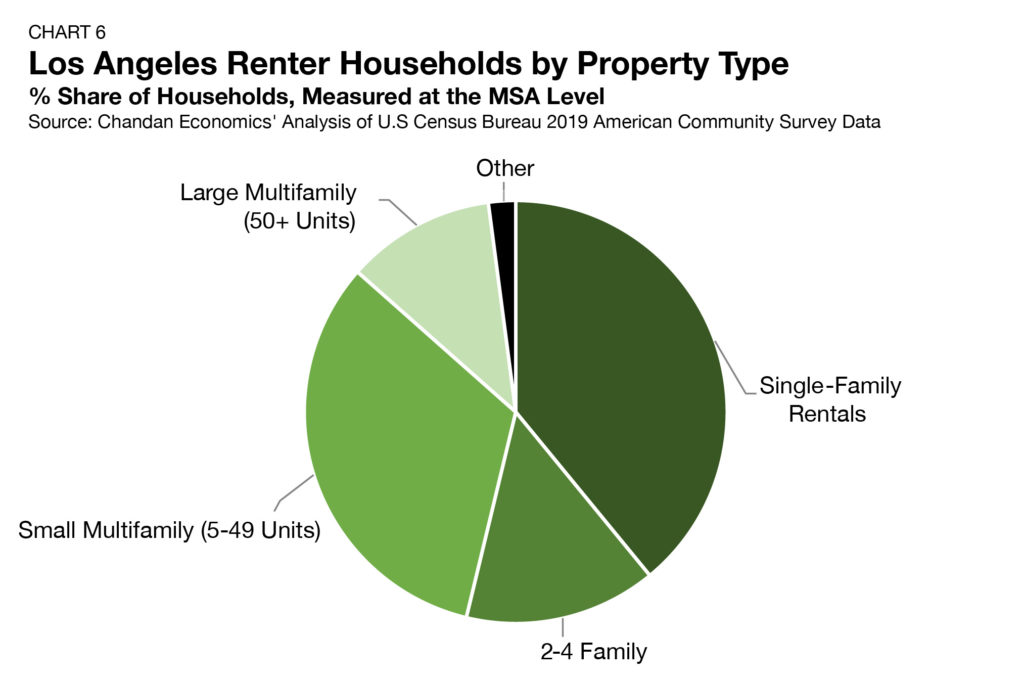 After seven consecutive months of job growth following spring 2020’s labor market freefall, a merciless third wave of the pandemic caused employment to tick down across the U.S. in December. California, the epicenter of the recent surge, accounted for 37% of the 140,000 jobs lost nationally in December. The Golden State saw its unemployment rate climb to 9.0% in December, jumping by 0.9% from the previous month.

Looking within the Los Angeles MSA, employment dropped by a weighty 42,000 jobs in December alone. This was a partial symptom of the in-person dining shutdown, according to the U.S. Bureau of Labor Statistics data. The LA labor market, like the rest of the country, saw the worst of its damage in April. Between February and April 2020, total employment in LA shrank by 15.9%.

Through the end of the year, LA recovered 37%, or 360,000 of the initial 970,000 jobs lost. If history is any guide, it may take the Los Angeles MSA longer to bounce back than the average U.S. city. Measured over the previous three downturns, the Los Angeles MSA took longer in each recovery to add back and eclipse the previous employment peak (Chart 7). Post-Great Recession, it took Los Angeles 61 months after bottoming out to surpass its 2007 peak — 10 months longer than it took the U.S. as a whole. With an emerging consensus that rent control policies fail to achieve their desired result, combined with a likely improvement on the public health front, the Los Angeles multifamily market should see less downside pressure in 2021. Still, the year ahead is more likely to be one of gradual recovery rather than robust growth.

According to Yardi Matrix, LA’s existing rental stock is forecast to rise by 2.6% in 2021 — a high figure for a metro experiencing a wave of outmigration. After multifamily rents fell in LA by 3.0% in 2020, they are expected to rebound by 0.3% in 2021. The return of sales activity at the end of 2020 is a positive signal that should limit the severity of negative pricing pressures. Further, the Federal Reserve’s emphasized commitment to keep interest rates low for the foreseeable future should continue to support asset valuations. On balance, the multifamily sector in LA bent in 2020, but it did not break. The year ahead comes with the promise of improvement.