Agency Financing: Past, Present and Future Since the outset of the global financial crisis, Fannie Mae and Freddie Mac, the two federally backed mortgage lending agencies, have taken on increasingly dominant roles in the multifamily sector. The housing market crash of 2007 served as one of the catalysts, when new regulations and credit tightening by more traditional lenders created a supply vacuum in the broader mortgage market.

While the agencies were initially founded to support homeownership in the U.S., the Federal Housing Finance Agency’s (FHFA) conservatorship of Fannie and Freddie in 2008 widened their role as critical players in the apartment market. Fast-forward to 2020, and the agencies now account for a plurality of all rental apartment financing across the country. As multifamily has remained one of the most resilient CRE asset classes amidst the current COVID-19 challenges, the agencies’ roles are again in the spotlight.

The Growth of Agency Financing

The agencies gradually rose in prominence. Fannie Mae was formed to support a New Deal era push to revive homeownership following the Great Depression. Officially, Fannie was, and still is to this day, a government-sponsored enterprise (GSE), with the U.S. Federal Housing Authority (FHA) backing the loans on the agency’s balance sheet.

Fannie purchased FHA-backed mortgages directly from lenders on the open market and repackaged them as mortgage-backed securities insured by the federal government. In turn, this would both stimulate and support liquidity in residential markets.

Following a decades-long market formation that eventually led to Fannie’s privatization, Freddie Mac was created in 1970 with similar objectives. As a GSE with the added goal of competing directly with Fannie, Freddie’s creation further widened mortgage debt accessibility.

The agencies have long had a hand in providing liquidity to the market for multifamily housing. Fannie Mae’s Delegated Underwriting Services (DUS) program launched in 1988. This created a mechanism to purchase multifamily properties from approved lenders on the open market. But until recently, traditional lenders dwarfed the size of agency balance sheets.

Two decades ago, banks accounted for the highest share of all outstanding multifamily mortgages, issuing more than one-third of those on the market in 2000 (Chart 1). 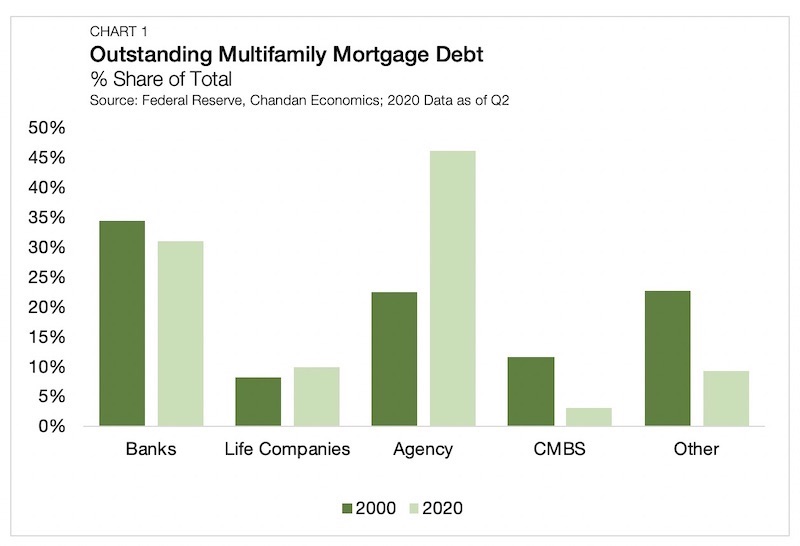 Back then, the agencies sliced out slightly over one-fifth of the pie. But by 2020, loans on their balance sheets accounted for nearly half of all outstanding multifamily mortgages. In large part, the housing market crash and the post-crisis evolution in housing market finance accelerated this trend.

The crash produced the conditions the led to the FHFA taking over Fannie and Freddie. It sparked the financial crisis, which resulted in increased regulation and capital requirements for the nation’s largest depository institutions. In turn, the banks’ share of total multifamily lending fell proportionally in the following years. At the same time, the agencies ratcheted up their balance sheets.

The great financial crisis was hardly the only driver behind the agencies’ increased market activity. Fannie and Freddie have stepped in, adding stability when credit markets weakened in other downturns. According to a 2009 report by the Joint Center for Housing Studies of Harvard University, “Both in the wake of the currency crisis in 1998 and again after 9/11 and the 2001 recession, Fannie Mae and Freddie Mac stepped up portfolio purchases and guarantees of multifamily debt.”

By attempting to backstop the housing market during these downturns, the agencies, in effect, generate new lending demand for mortgage loans by acting as a guaranteed buyer in the market. As a result, the overall market cap has increased each time Fannie and Freddie have stepped in and increased purchasing volume (Chart 2). In addition to deepening their lending activity in the multifamily sector, the breadth of the agencies’ influence also widened through the deployment of mission lending programs. After the FHFA extended beyond the GSE designation to include direct conservatorship in 2008, the agencies set initiatives to meet the mission of building a more sustainable residential market foundation.

Fannie Mae launched its Multifamily Small Loan program to address the specific needs of smaller apartment property owners. Since the post-crisis recovery began in 2009, the initiative has provided the sector with more than $24 billion in financing. Many existing DUS lenders may also qualify for subordinate loans or refinancing through supplemental loan programs.

Beyond meeting the market’s changing needs, the agencies’ mission lending furthers goals it deems essential. This includes the deployment of green financing for capital upgrades to improve the carbon footprint of properties, as well as supporting affordable housing through the Section 8 program. By expanding the options available to multifamily lenders, while also promoting long-term goals, the agencies have introduced forward guidance for investors and other market participants, while strengthening market fundamentals.

Covid-19 has brought about a swath of new challenges, which the agencies must consider. While the multifamily sector has fared well thus far, the pandemic’s domino effect on the economy will have implications for housing. Plus, trends continue to indicate an exodus from major cities.

While the rental markets currently have yet to reflect the worst of these fears, there is evidence of rising exurban demand. Furthermore, as the U.S. economy attempts to recover from the steep job losses resulting from the pandemic, local market outlook will hinge on an area’s ability to restart business and financial activity.

Shifting renter preferences and remote working could sustain the multifamily market’s momentum in mid-sized urban and exurban markets post-2020. As historically demonstrated, how the FHFA, Fannie and Freddie respond to these shifting trends will influence the sector’s future lending environment.