Freddie Mac’s Apartment Investment Market Index, a composite tracking of multifamily interest rates, prices, and incomes, ticked down in the first quarter of 2022. The composite investment index declined 6.1% from the same time last year and 5.3% from the previous quarter (Chart 1). The primary driver of this decline was a jump in multifamily mortgage interest rates, which have risen as part of the Federal Reserve’s ongoing monetary tightening cycle. A rapid ascent in asset valuations, which were up 21.1% during the 12 months ending in March 2022, also counted against the overall index. 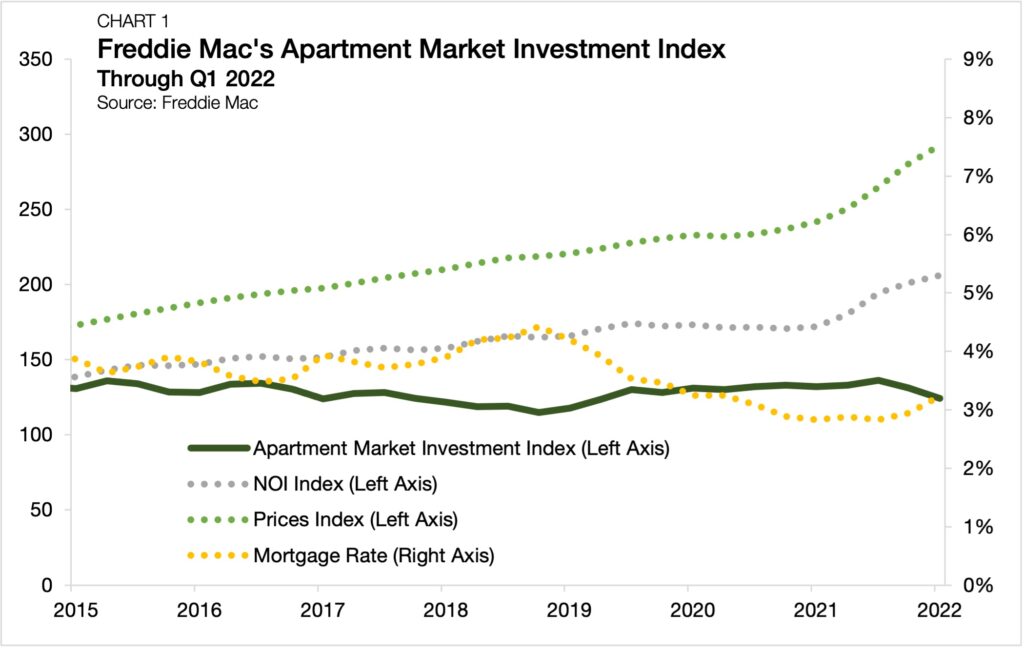 Property-level net operating incomes (NOIs) contributed positively to the Investment Index. According to Freddie Mac, NOIs were up a record-setting 19.8% from a year earlier in the first quarter of 2022. Before the most recent run-up in multifamily rents (since Q2 2021), NOIs had never grown faster than 6.6% annually (Q3 2015), which the current mark beats by a factor of three. These national NOI growth data shed light on the ability of apartment assets to absorb the effects of inflation, thanks in part to the regular re-setting of rents as lease terms are typically only one year in length.

Where Are NOIs Growing Fastest?

In addition to national tracking, Freddie Mac also collects and reports data on 25 major metropolitan areas. Topping the list of markets with the most NOI growth over the last 12 months was a triumvirate of Floridian metros. Orlando led the way, posting an annual NOI growth total of 33.1% (Chart 2). Tampa and Miami followed closely behind, with annual NOI growth reaching 31.4% and 30.9%, respectively. Notably, New York, which has been referenced during the pandemic as a spot where overall rental demand is waning, was fourth in the nation, coming in at 30.0%. These data align with anecdotal reports of lines in the Big Apple for apartment viewings and bidding wars between prospective tenants.

Rounding out the top five markets was Phoenix (29.1%), which has maintained rapid population growth after it was the fastest-growing large metro in the 2010s. In total, 17 of the 25 metropolitan markets tracked had an average annual NOI growth total above the national average. Moreover, even for the bottom-performing metros on the list, NOI growth totals are, at a minimum, keeping pace with inflation, a sign of the top-to-bottom strength of the national apartment market.