A Need for Affordable Housing

Airgood-Obrycki highlighted a 12-year increase in rental demand from 2004 through 2016 when the U.S. added over 10 million renter households. In that period, renter household growth increased at a faster pace than the average overall household growth. It reached 36.6% in 2016. A two-year drop followed this rise in demand. But the upward growth of renters resumed in 2019, offsetting the decline with an additional 350,000 renters.

Even during the slowdown from 2016 to 2018, the number of high-income renters with annual incomes of $75,000 or more continued to grow by more than 500,000 households. The report noted, “With vacancy rates so low, rent gains continue to outrun general inflation.” The Consumer Price Index calculated that rent of primary residences increased by 3.7% year over year in the third quarter of 2019. This compared to a 1.1% increase in prices for all non-housing items.

Currently, there are approximately 43.5 million renter households. The number of higher-income renter households grew due to shifts in perceptions. Airgood-Obrycki explained now “renting is more acceptable across the life course.” She cited a Freddie Mac survey in which the majority of renters said they currently felt satisfied with their renting experiences and how renting fit their lifestyles.

The Harvard researchers found the top earners in more expensive cities were more likely to rent than the top earners in less expensive metros. Airgood-Obrycki added that the growth in homeownership since 2010 was mostly attributable to households making a minimum of $150,000 a year, with most of the households’ earnings exceeding $200,000 a year. This backed the hypothesis that affordability is a significant barrier to homeownership, including for earners making a solid $75,000 a year.

High-income renters constitute nearly a quarter of all renter households, said Airgood-Obrycki. Their share in occupying rentals is rapidly expanding. She explained this buttressed robust rental construction in recent years. She reiterated that a lot of the new construction has been in the high-end segment. “Certainly, the increase in costs of construction is playing into this, but another reason is the location of these units. The majority are going in central counties of the nation’s largest metros where land is more expensive,” she stated. 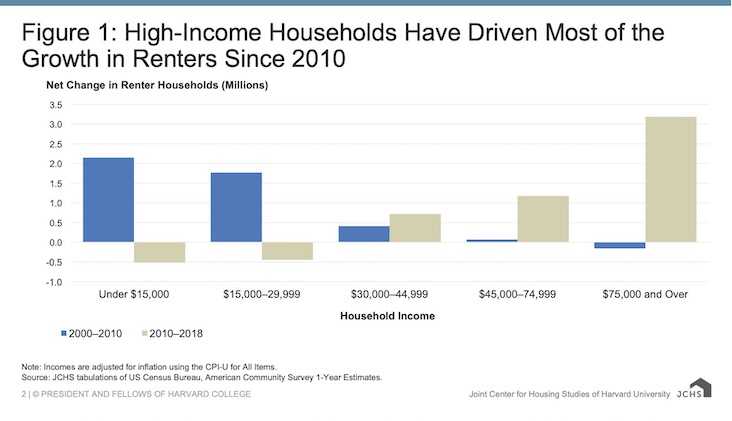 Construction of larger buildings tends to include more amenities, such as in-unit air conditioning, laundry, fitness centers and roof decks. In central locations, with these perks, the owners of these new apartments can achieve higher rents. The report showed as of the third quarter of 2019, the market experienced 21 consecutive quarters of rents rising more than 3% each year. “If we control for inflation, we’ve had 29 consecutive quarters of real rent growth, which is only one quarter short of the longest streak we have recorded,” said Airgood-Obrycki.

In addition to the high-end multifamily construction, the market has seen a substantial increase in single-family rentals. The SFR boost initially resulted from the real estate crisis. However, the Harvard researcher commented that this product also tends to be larger, thereby commanding higher rents. Arbor Realty Trust is a leading Fannie Mae and Freddie Mac lender, with decades of experience in affordable housing. Visit Arbor’s website to learn more about the multifamily and single-family markets and Arbor’s financing solutions.