How Rent Collections Have Differed by Tenant Income Level Second to only the toll on public health, the economic fallout remains one of the most pressing effects of the ongoing pandemic. Starting first in major metros across the Northeast, namely New York and Boston, through March and April, the virus spread throughout urban centers and their surrounding areas like wildfire.

Employers shuttered their offices and sent staff home, while states implemented restrictions on commercial activity, drawing consumers away from the economic and lifestyle interactions that give cities their value. In New York City alone, more than one million residents have lost employment, while the demand-driving gears of the city have shifted into neutral.

Concerns over how the shutdown would impact apartment markets in cities like New York and elsewhere quickly bubbled. But the swell of stimulus and tenant protections introduced in the federal CARES Act proved effective in slowing the threat.

According to a Chandan Economics’ analysis of the Census Bureau’s Weekly Household Pulse Survey, the number of tenants meeting their rent payments averaged 81.0% through the first four weeks of the survey. Over the same period, an additional 2.4% were granted permission to defer their monthly payments to later dates — a byproduct of federal, state and local eviction moratoriums. Meanwhile, an average balance of 16.0% of renters could not make their monthly obligations during this time frame. The analysis excluded respondents who did not indicate their confidence level regarding their next payment status. The survey was a short-turnaround instrument, in which the Census Bureau collected data for 90 days, beginning on April 23. The goal was to provide information to aid in the post-pandemic recovery.

For the week ending July 21, the Pulse Survey indicated 78.0% of renters reported making their most recently due rent payment. This figure was up from lows set the prior week, but down two percentage points from four weeks earlier. Rent payments saw a high watermark of 82.2% for the week ending May 5. Since then, levels have ebbed and flowed between peaks and valleys influenced by cashflow cycles. Yet the recent downward trend may be indicative of future challenges.

Legislation for a second federal stimulus package has remained elusive. On the surface, it appears that the lack of progress is affecting renter expectations. Pessimism among renters rose in the past two weekly surveys, with roughly a third of renters reporting either slight or no confidence in their ability to pay the next month’s rent. Compared to notable tools such as the National Multifamily Housing Council (NMHC) Rent Payment Tracker, Pulse captured more lower- and middle-income households that tend to represent a larger share of the apartment market, in general. In Chandan Economics’ analysis of the data, using an annual household income of $75,000 or higher as a cutoff threshold, higher-income renter households reported making their last month’s rent payments 92.5% of the time over the 12-week survey period. For renter households earning below $75,000, this “in good standing” share fell to 77.9%. 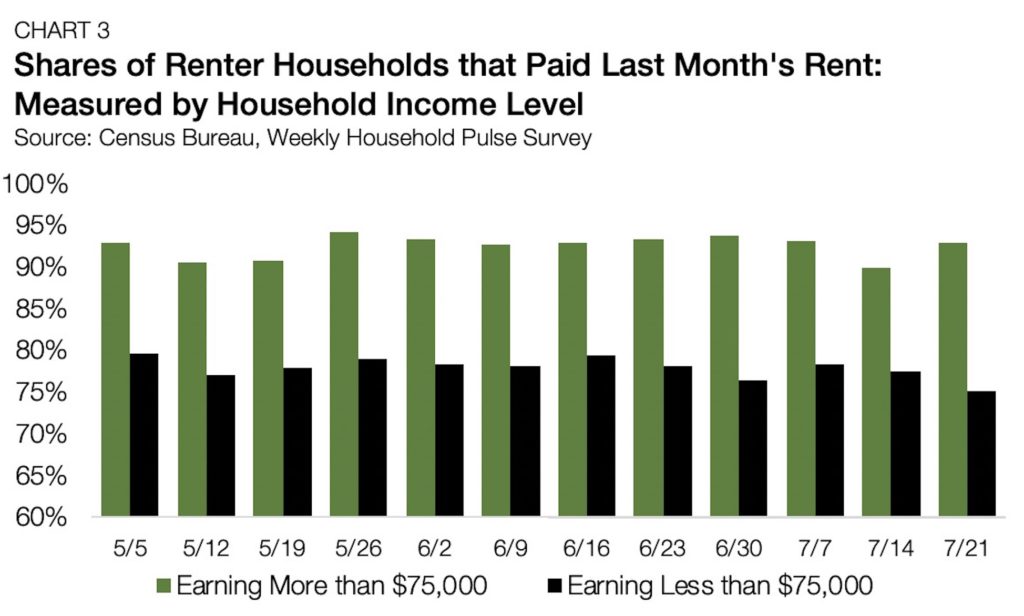 While a degree of income-based performance differences is expected, the relative convergence or divergence of the two groups can offer substantive clues about how the ongoing economic turmoil is affecting different types of households. Moreover, understanding these differences can aid in crafting a more efficient and effective policy approach.

According to the last Pulse survey, lower-income households’ payment rates fell by 2.3% from the previous week. Meanwhile, higher-income renter households reported an improvement of 2.9%. The two alternately moving trends led to the largest one-week difference between the two income groups as the performance spread jumped to 17.7% in late July. Moving ahead, in the short term, a new round of stimulus assistance will undoubtedly be a catalyst to new swings in tenant performance. In the medium term, the pace of economic activity in different regions of the country should provide the foundation for the apartment market’s outlook. While the Pulse survey has concluded, its timeliness and inclusiveness have produced some of the most actionable economic data of the crisis.

The multifamily sector has navigated through a historic national upheaval in recent months and has avoided worst-case scenarios. However, the data underlines how the ongoing disaster relief policy discussions will acutely affect tenants most at-risk for missing rent payments.

Learn more about Arbor Realty Trust’s multifamily products for your strategic investment goals. Contact Arbor today to speak with one of our specialists.