How Will Work from Home Adoption Impact Multifamily? Work From Home is Here to Stay

Remote work was not new before the pandemic, but it also was not common. As companies across the U.S. shuttered their offices and sent employees home in March 2020, few were certain how successful and enduring work-from-home (WFH) adoption would be.

More than a year and a half into this unprecedented experiment, workers and employers appear to largely be embracing remote work. A weekly Morning Consult survey of employees working from home because of the pandemic found that 74% of respondents were more likely to apply to jobs that have a remote work option (Chart 1). On the employer side, an August 2021 McKinsey survey of 100 corporate executives found that nine out of 10 CEOs expect their employees to work from home at least one day a week post-pandemic. 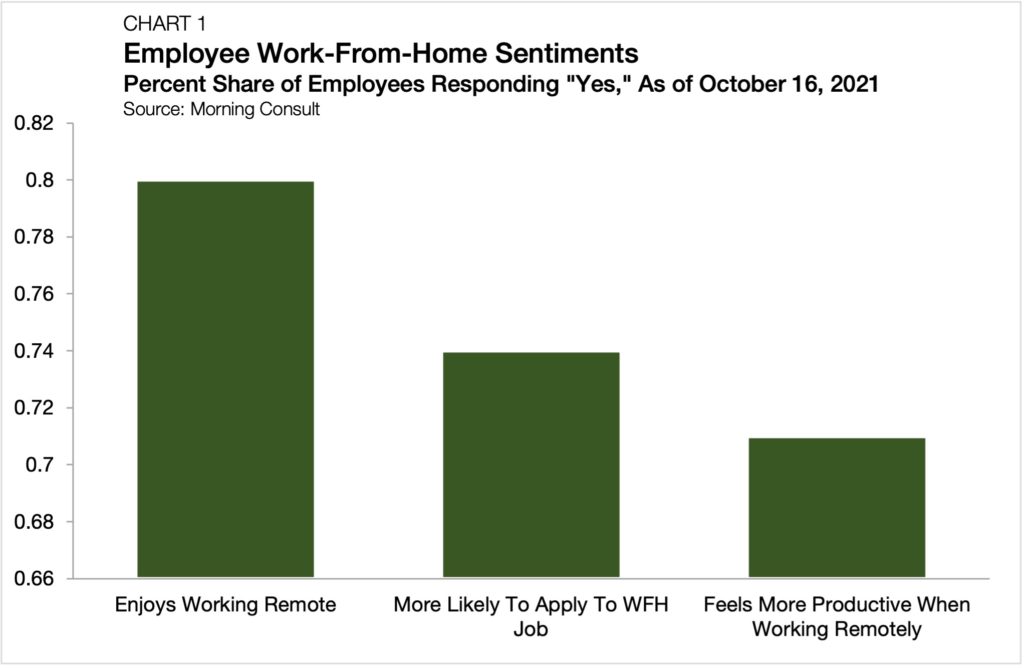 The McKinsey survey reflects the National Bureau of Economic Research’s estimates that 20% of full workdays will likely be completed remotely post-pandemic compared to just 5% before. However, their analysis also forecasts a negative spillover effect. WFH adoption could translate into a 5% to 10% drop in consumer spending in city centers and create downstream negative impacts for commercial real estate markets.

Multifamily demand growth was already shifting from larger metros to smaller metros heading into 2020. Like many other trends, the pandemic accelerated this shift. The widespread adoption of remote work was one of the key enabling factors. WFH allowed many workers to swap their expensive but small quarters and office commutes for cheaper but spacious housing without commutes.

A Federal Reserve Bank of Cleveland analysis found that migration into midsized and small metro areas surged relative to pre-pandemic trends between second-quarter 2020 and second-quarter 2021. However, the migration trends were most pronounced in large metro areas. Outward migration from these larger areas into midsized and small metro areas increased by 16.7% and 15.8% relative to pre-pandemic trends, respectively. Meanwhile, population migration into large metros decreased over the same period.

Beyond the perception that higher urban density is associated with higher coronavirus contagion risk, there are two primary reasons large, expensive metro areas have struggled to retain residents during the pandemic: affordability and higher levels of WFH adoption.

The nation’s larger metros tends to support a greater share of knowledge-based jobs that can more easily transition to WFH. A U.S. Bureau of Labor Statistics analysis suggests smaller, nonmetropolitan areas have higher concentrations of in-person occupations and, therefore, less exposure to remote work. In nonmetropolitan areas, less than one-third of workers have jobs that can easily be completed while working from home (Chart 2). The “ability to telework” rate generally rises with metro population totals. In metros with at least 2.5 million residents, roughly half of all workers can complete their jobs at home. With a higher share of workers able to transition to WFH, many residents in large metros took the opportunity to trade their expensive, close-to-work apartments for more affordable and spacious options elsewhere. Taking together the Cleveland Federal Reserve reported migration data with average rents reported by Zillow uncovers a positive correlation between pandemic-era urban migration patterns and rental affordability (Chart 3). Of course, it was not just metro-to-metro migration patterns that accelerated during the pandemic. There is also evidence the pandemic has shifted some rental housing demand out of urban cores and into the suburbs.

Taking the above trends together, WFH adoption has increased rental demand for larger spaces and amenities that complement remote-work lifestyles. This shift in renter preferences was a headwind for large multifamily properties in pricey gateway markets during the pandemic. However, it also opened a new door for less expensive metros and regions on the outskirts of big cities.

Amenitized assets located in more spacious zip codes remain well-positioned to take advantage of the secular shift. However, as cities reopen, cultural attractions resume operations and some employers bring their people back to the office, the prospects of many of these urban properties are brightening.

Despite taking a beating during the pandemic, not all is doom and gloom for big cities and downtown areas. After all, the same diversity of talent, culture and industry that historically fueled urban growth and success remains their biggest advantage.

Some urban-located companies embrace WFH and have a decreased need for physical space. However, others are likely to come in and absorb the space for similar or other uses. There is already evidence that some are betting on an office sector revival, with notable purchases by Google and Amazon making headlines in recent months as they look to expand their footprint in large, talent-rich metros.

Nationwide, office demand is in recovery, already surpassing pre-pandemic levels in some markets. According to the VTS Office Demand Index (VODI), which tracks office activity in cities compared to their 2018-2019 average, national office demand has rebounded after falling dramatically in June 2020. A rebound in big-city office markets will serve as a counter to remote work’s pressure on large, centrally located multifamily assets. In the New York City metro, one of the downturn’s hardest-hit metros, service-sector firms are now signaling renewed optimism in the area’s recovery.