The U-6 unemployment rate, an alternate measure that includes the headline U-3 reading and adds in workers who are marginally attached to the U.S. labor force or working part-time for economic reasons, also posted solid gains in March, falling to 10.7%. Month-over-month, the U-6 unemployment rate fell by a seasonally adjusted 0.4%— 0.2% attributable to U-3 declines and another 0.2% from the measure’s marginal components.

Total nonfarm employment grew by 916,000 jobs in March, the highest growth since August 2020 (Chart 2). After labor markets cooled through the fall and dipped back into contraction in December, hiring has since regained momentum. Not only has the labor market now posted three consecutive months of employment growth, but each month has seen greater growth totals than the prior. While the civilian unemployment rate is a source of good news, optimism must be tempered by continued weakness in the labor force participation rate (LFPR). In January 2020, the LFPR rose to 63.3%, the highest level since August 2013 (Chart 3). As of the March BLS jobs report, the LFPR stands at 61.5%, closer to its April 2020 low of 60.2% than its pre-COVID peak. If an unemployed worker were to give up the search entirely, they would be tracked as leaving the labor force. As a result, the unemployment rate would fall. For this reason, it is hard to hold up a single labor market indicator as a prognosis of good health. However, in March, the unemployment rate fell as the LFPR ticked up, signaling that the improving data are not from an economics game of smoke and mirrors but rather a healing labor market.

All things considered, the share of U.S. adults engaging with the labor force may see prolonged weakness as the economy shifts into recovery. Following the 2001 recession and the Great Recession of 2007-09, it took 38 months and 75 months, respectively, for the labor force participation rate to trend back upward.

According to the BLS Job Openings and Labor Turnover Survey (JOLTS), the number of job openings available is rising steadily. In February 2020, just before the start of the crisis, the BLS estimated that there were 7.0 million seasonally adjusted job openings. In April 2020, this total dropped as low as 4.6 million. As of the latest survey, the total has surged to 7.4 million through February 2021, surpassing the pre-COVID benchmark. Comparing these available job totals to the number of job seekers also indicates a trajectory of firming improvement. Between late 2018 and early 2020, the ratio of openings to seekers plateaued near 1.2, reflecting a surplus of openings and a labor shortage (Chart 4). In April 2020, the ground caved in, and there were roughly five out-of-work Americans for every job opening or 0.2 jobs per unemployed person. Through February 2021, there are 0.74 openings per job seeker, jumping 0.04 from the month prior. Turning now to the ADP’s National Employment Report, there are clues about which types of companies are leading the U.S. economy back to growth. Disproportionately, small-sized companies (1 to 49 employees) have outperformed in the COVID recovery. At the onset of the shutdown, small and midsize (50 to 499 employees) companies took the brunt of COVID’s economic pain, with payrolls declining by 16.1% and 16.2%, respectively (Chart 5). Large-sized companies (500+ employees), meanwhile, only saw payrolls decline by 14.2% in April 2020, reflecting better access to capital and greater cash reserves. Thereafter, the script has flipped. Compared to pre-COVID peaks, payrolls at small companies are only down by 4.9%. At midsize companies, payrolls are down by 7.1%. Trailing behind are large firms where payrolls remain down by 8.0% compared to pre-COVID highs. Moreover, despite small firms making up less than 42% of payrolls, they accounted for more than 50% of private-sector job creation in March, indicating they are punching above their weight. 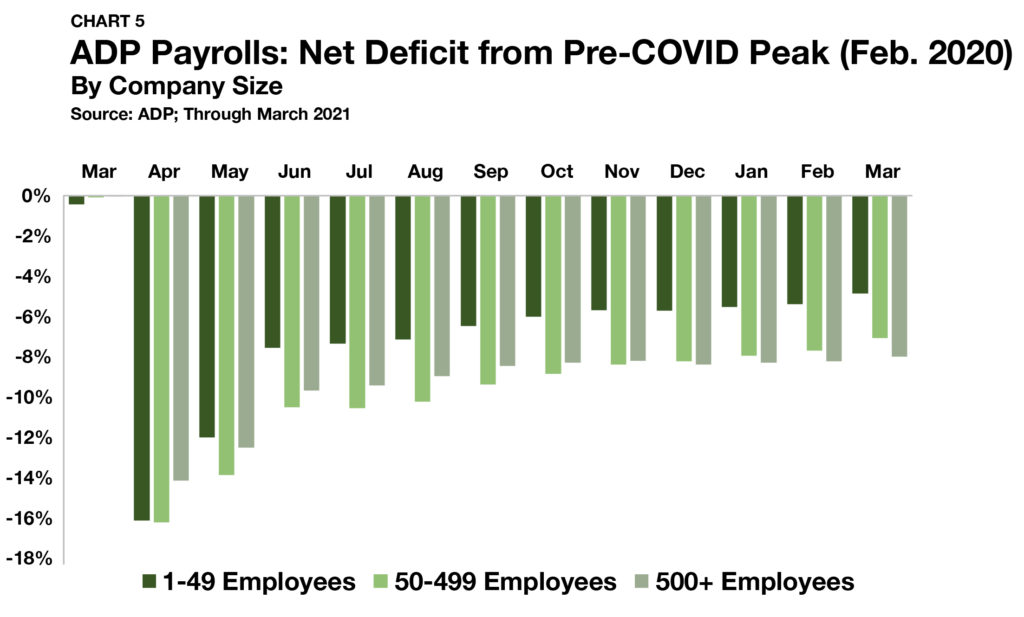 When it comes to how the U.S. labor market recovery ahead will factor into economic growth, it is clear that market watchers are not only optimistic about 2021, but are increasingly so. With the first quarter now in the rearview and the Bureau of Economic Analysis still tallying up the scorecard, economists forecasted in the latest Wall Street Journal survey that the U.S. economy expanded at a seasonally adjusted 4.9% annualized rate to begin the year (Chart 6). As part of the same survey, economists forecasted growth rates of 7.0% and 6.8% in the third and fourth quarters, respectively. When the books close on 2021, these economists anticipate the U.S. economy will have grown by 6.0% in total — a lofty improvement on the 3.7% forecast given just three months earlier. After a uniquely challenging year, there are a number of green shoots popping up as the economy transitions from a springtime thaw to a hopeful summertime expansion. An unprecedented $4.8 trillion of COVID-related stimulus and aid passed during two administrations remains freshly loaded. Further, the pace of vaccination has picked up considerably in recent weeks, and COVID-related death totals are down to the triple digits nationally. In direct contrast to the conditions of one year ago, tailwinds far outnumber headwinds on the horizon, and 2021 is positioned for a year of banner growth.