National average cap rates for small multifamily properties narrowed by 5 bps in the second quarter of 2020, reaching 5.8%. In the first quarter, cap rates widened by 21 bps, and there was some concern that they would further inch up as the economic downturn continued. However, small multifamily cap rates held steady due to a pricing tug of-war. Through the last three months, 10-year Treasury yields averaged just 0.69% — the lowest quarterly reading on record. As geopolitical and economic uncertainties have risen, making market risks more difficult to gauge, investors have sought “safe-haven” assets, causing the price of Treasurys to rise and their yields to fall. The risk-free interest rate is embedded within the yield structure of all other market returns, including cap rates.

Investors require additional compensation when accepting additional risk. We can infer this risk premium in small multifamily by looking at the difference between cap rates and Treasurys. Through the second quarter, the spread stood at 518 bps, the highest level on record. The cap rate spread between small multifamily and the rest of the sector stood at 52 bps through the second quarter of 2020, barely budging from the first quarter. The CARES Act stimulus, additional unemployment benefits, and eviction moratoriums have all had the effect of providing housing stability in a period of crisis. With many of these protective measures set to expire, the resiliency of property-level cash flows is a resurgent topic of debate.

According to a Chandan Economics Analysis of the Census Bureau’s mid-July Weekly Pulse Survey, 39.4% of renters earning less than $75,000 either had no confidence or slight confidence in their ability to pay their August bill. This represented a 4.9% increase compared to sentiments measured in mid-June. 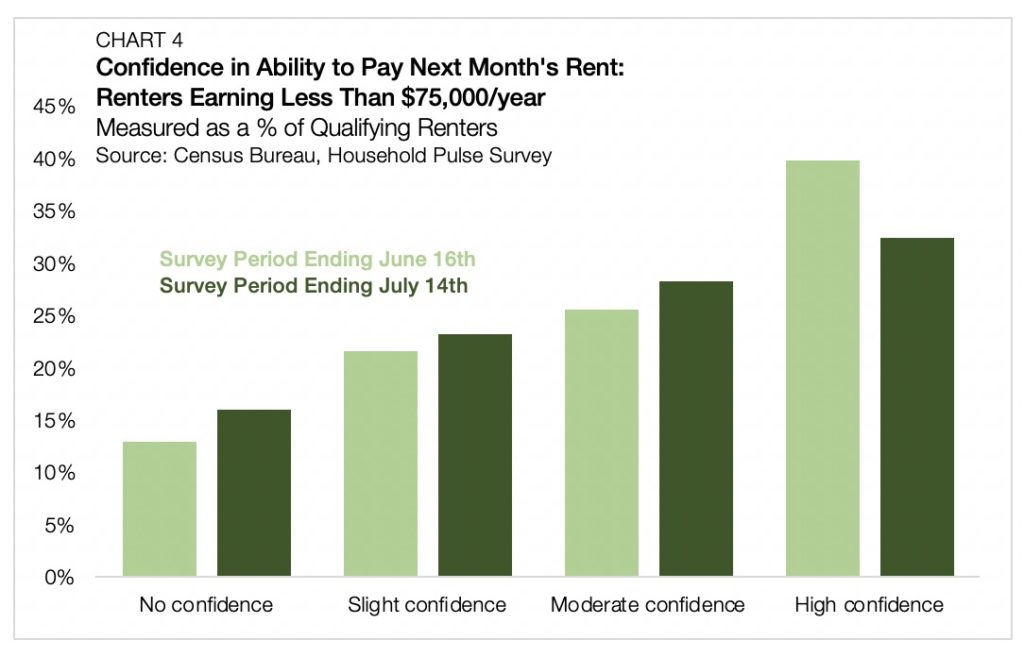 Higher-earning renters are not facing the same level of concerns. For renters earning $75,000 to $150,000 and above $150,000, only 18.5% and 6.6% of renters were pessimistic about their ability to pay August rent, respectively. Small multifamily renters tend to earn less than their large multifamily neighbors, increasing the concern for rent collections with this asset class.

Simultaneously, small multifamily renters are comparatively less transient and less likely to transition into homeownership over the medium-term. With COVID-19 causing many young households to reconsider their housing location preferences, the small multifamily subsector may prove more resilient in re-leasing and maintaining stable occupancies over the medium term. There are many moving pieces in play, and how small multifamily attenuates the forward-looking risks compared to the rest of the sector remains an ongoing discussion.